skip to main | skip to sidebar

Cavs play in the 90s throwback jerseys and win 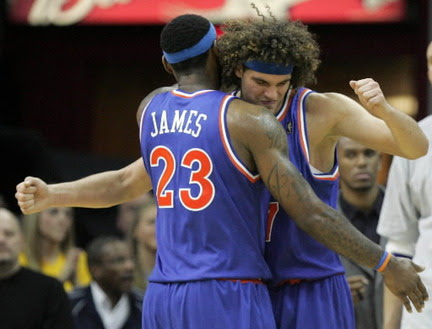 Darkness has enveloped the Sixth City since this spring when the Chosen One's efforts were not enough to end the curse. Crumbling industries, jobless citizens, and discouraged, distraught, depressed fans... Rumors that the King may leave his Kingdom. Without him, the city would die. Alas, at least one more year of his reign. Let us enjoy this potentially last crusade for an NBA title. For if the prophecy is right, the city on the lake will burn. And that would definitely be stimulative for its dying and desperate economy.

PC
Posted by Productive Citizen at 8:50 AM No comments:

In what is a blatant attempt to keep the King happy, we have traded Ben Wallace's huge contract, a second round draft pick and Pavlovic to the Phoenix Suns for Shaq O'Neal. This will help us, but we still need a better shooting guard and power forward. Here is a preview of what we have to look forward to...

PC
Posted by Productive Citizen at 7:10 AM No comments:

PC
Posted by Productive Citizen at 4:31 PM No comments:

Productive Citizen
I bought you from your parents for 50 cents...